Skip to content
May 18, 2017August 13, 2017 momentsintimefashion
After one of the most beautiful constitution days ever I felt I wasn’t quite finished with the subject Bunads and Festive costumes. Also I saw a photo of a friend of mine and her new bunad which she partly made herself, and she had also a very cute story about a piece of jewelry she has on her bunad. So I asked her if I could use her photos and story on my blog.
And here she is the fabulous Anne who is not only beautiful, but also one of the most creative and talented people I’ve ever met. She’s an interior stylist and can make any room shine. 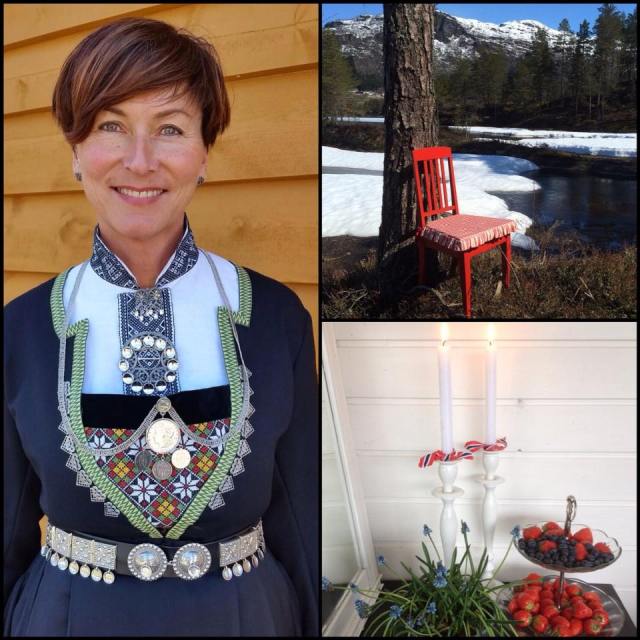 Anne told me she has been wanting this bunad “forever” it’s a winter bunad from Hardanger for the married women. And this year her wish finally came through. She actually made the bunad herself with guidance from a friend. The shirt and the embroidered bringeklut (no English word for it, but translated it means breast cloth) was made by someone else. And she wouldn’t be Anne if she didn’t use her creativity and make her very own touch to it. Do you see the coins on her costume? From old days there was a tradition with a Brides dollar, they made jewelry of coins to put on their bunads. I have one myself, I’ll show it further down the post. This it not common in our days, but Anne designed her very own brides dollar. On top there’s a 25 øre coin from 1961 the year she was born. The big coin is a silver dollar from 1921 which is the year her mum was born in Canada. The the three coins at the bottom is 50 øre coins one for every child she has and of course from the year they were born. That’s how to use a silver dollar, isn’t it wonderful? 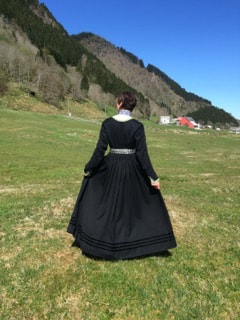 Here you can see the whole bunad, look at the amount of fabric and all the details.
My costume is not a bunad, but more a festive costume. It’s a Vestlandsstakk, we use it in the same way as a bunad so it’s not always easy to tell the difference between a bunad and a festive costume. But as a rule a bunad is more traditional and are approved as bunads. There are also more rules how to wear a bunad than a festive costume. 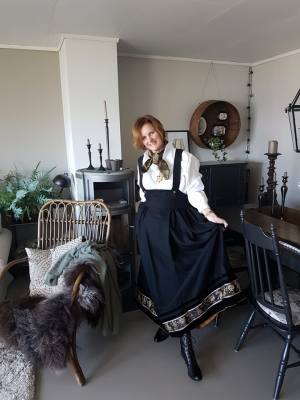 Here’s two photos from yesterday, as you can see I also have a shawl to my costume, really didn’t need it yesterday as it was quite warm.

Here’s some detail from my outfit. The silk scarf is made for the costume and the boots too. You won’t believe how comfy they are, the good thing is I can wear them also when I don’t wear the costume. The silver does not belong to the costume, but I decided to use the jewelry from my old bunad which I handed over to my daughter in law. You can find photos of it in my last blogpost. The small piece I had for my bunad when I was little and the big belonged to my grandmother. And do you see the coin?? That’s my bridal dollar. The coin Danish and from 1693, can you believe that? Unfortunately I can’t use it as the lock does not work.

I hope you enjoyed this post, next post will be about the capsule wardrobe again.
Until next time
Kari

View all posts by momentsintimefashion

2 thoughts on “How to use a Silver Dollar”

This is a text widget, which allows you to add text or HTML to your sidebar. You can use them to display text, links, images, HTML, or a combination of these. Edit them in the Widget section of the Customizer.